The response to our decision to hold a wildlife photo competition during the lockdown has been splendid with over 150 pictures being submitted by the 31st of May deadline.

The competition was designed to help our members through a very difficult period and at the same time take advantage of everyone’s enforced free time to start building a photo archive of village wildlife. The theme was “Spring” and entries were invited under seven categories: Birds, Bees, Butterflies, Other animals, Wildflowers, Landscape and Photos from Children (aged 11 and under). 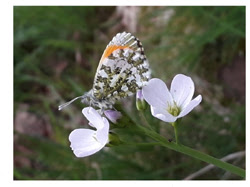 The winning picture of the “butterfly” category chosen by judge Diane Morris was taken by Mel Taylor and this picture went on to become the overall winner, judged by John Fontana and Harry Jevons.  Diane commented “the photo shows the butterfly’s mottled green underwings with a hint of orange on the upper wing to identify it as a male, and captures it taking nectar from ladies smock, it’s main foodplant”.  A delighted Mel said “I’m grinning from ear to ear – not something that has happened much in recent months”

The “birds” category was won by Anne Hodgson with a picture of a grey heron on the River Wharfe above High Mill.  Judge Chris Acomb liked its composition, particularly the diagonal of the ‘log perch’ against the upright position of the heron. The winning “bees” photo of a tree bumblebee was taken by Ian Benson.  Judge Maurice White admired its balance of colour and shade with the tones of the bee in clear natural light.

The “other animals” category attracted a diverse range of entries including roe deer, frogs and mating hedgehogs.  The winner was Mary Jenner’s picture of a frog in a garden pond.  The category was judged by Jan Hindle who commented “the viewer’s attention is drawn immediately to the eye of the frog at the centre of the photograph and the close image allows us to appreciate the textures, particularly of the frog’s skin”

There were over thirty pictures submitted in the “wildflower” category.  Choosing a winner was consequently difficult, but judges Nicky Vernon and Heather Burrow picked out a photo of a wood avens flower by Don Barrett as the winner.  They remarked “the photo is beautifully crisp, nicely lit and interesting. You can even see the shadows of the stamens on two of the petals. It repays study, and tells you all you need to know about a Geum flower”.

The “children’s” category was also well-subscribed with pictures of wildflowers, butterflies, and landscapes, but the winning entry, by seven-year old Evelyn Klatt, was of a “little brown mouse” captured close to the Saw Mill Pond footpath.  Head judges John Fontana and Harry Jevons also judged the children’s category.  John said that with children as young as five in the competition, rather than technical skills, they were looking for photos that most portrayed wild life in its natural environment, and where images were composed in a way that made the subject stand out.

“Landscape” was the most popular category, such that judge Geraldine Thompson opted to declare three joint winners.  The rules for this category required pictures to be taken of landscapes within the parish boundaries or seen from within parish boundaries.  Mike Valiant’s picture of the moon indeed followed the rules!  Geraldine commented “an unusual and striking image of tremendous contrast between the cool crisp clarity of the moon’s surface and the deep impenetrable indigo blue of the mysteries of limitless space beyond”.  On Debs Griffiths’ picture she remarked “a rare and serendipitous opportunity to capture the extraordinary dramatic colourful light at early dawn during a narrow timeline in the short life of the cherry blossom” and on the third joint winner by John Fontana she said “this is a quintessentially Addingham spring scene familiar to local walkers”.

In addition to the eight winning entries there were 40 pictures highly commended by the judges.  These can be seen on the Environment Group’s website: https://addinghamenvironmentgroup.org.uk/.  The Environment Group wishes to thank everyone for their entries and thanks especially the judges for their help, thoughtful judging and constructive comments.   There may well be another competition next year, lockdown or no lockdown.